September 1,2012–The College of Computer Studies and Engineering fended-off Radiologic Technology department with a 2-0 set score to win the Men’s Sepak Championship duel at the college gymnasium. 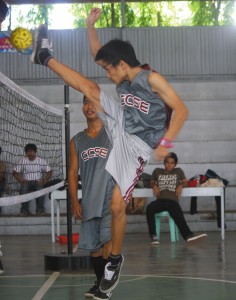 CCSE squad, headed by team captain Alvin Fernandez engineered a 21-17 set score to dominate the first set. The team’s main offensive player, Jumel Vallejos hit the last play to finish the game at the second set with a 21-15 advantage. The Radiologic Technology team, led by Ryan Jucutan, was unable to neutralize the opponent’s offense on the second cut and lost the Championship thriller.

Meanwhile, the College of Management and Accountancy notched the third place for this year’s contest. Also, the defending Champion, College of Nursing, became the underdog team for this year’s league. CCSE also defeated RT on their first face-off at game 6 of the elimination period.

The College of Arts and Sciences pawned CON on Game 1 of the eleminations. Only five teams joined the said competition for this year.