CON took the first set with a three-point advantage over the challenging team. Recovering from the 25-22 score, CCSE easily owned the next two sets, leading the game with twice the opponent’s score, clinching 25-12 and 25-14 respectively. 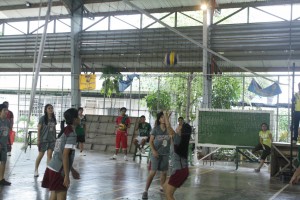 The CON struggled against the already dominating squad on a neck and neck exchange of rallies at the end of the fourth set, which concluded to a 26-24 advantage for the former.

It was a magnificent display of spikes and blocks during the tie breaking round as the two teams tried to dominate one another to decide this year’s champions.

The game concluded with CCSE grabbing the title from CON, adding to the golds and glitters of the already most decorated department.

“They were inspired to do their best with the help of their own team members. Nagkaroon ng coordination at team work among the players kaya ganun naging resulta,” says Engr. Bernardo F. Vallo, coach of the CCSE

September 6, 2012–“Shout for joy, sing His praises, and lift your voice, unto the Lord!” Songs and dances of worship and praises presented by freshmen students filled the atmosphere of Thursday’s evening.

Youth JaM was celebrated for the first time in Lorma Colleges. “JaM does not however refer to teen parties. Instead, it is Youth: Jesus and Me,” clarified Pastor Brennus Paragas, Lorma chaplain. 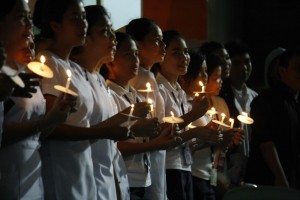 Twenty one sections performed on stage, delivering creative skits, musical and numbers. Of these, five groups were recognized for their memorable performances and were given financial incentives.

A special award for the department that has the most number of students who finished the program was given to the Radiologic I –I department.

The “Miracle” musical play of the BSN I – I touched the hearts of the observers.

Though the program ended late, a considerable number of students still stayed and finished it.

The first ever Youth JaM was organized by the United Christian Church.

September 7, 2012–The College of Computer Studies and Engineering (CCSE) squad achieved another milestone as they defended their volleyball title with a 3-1 set score against rival College of Nursing at a jam-packed college gymnasium during the school intramurals. 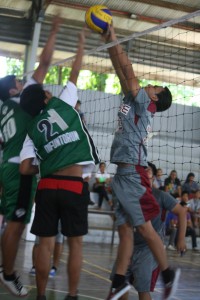 The reigning champs’ Lhesley Legaspina led his team to victory delivering a winning spike on the fourth set with a 25-17 score.

From the start to its end, both teams made the crowd roar with excitement on their neck-to-neck rallies. After several exchange of dazzling attacks, CCSE dominated the first set of the match with a 25-19 blast.

Being clobbered on the first chapter, CON heated up and bounced back on the second set clinching a 26-24 advantage.

The defending champs regained their composure on the third set and mercilessly routed the opponent at 25-8 set score.

The challenger fought hard to force a set 5 showdown but CCSE rallies subdued their net foe on the fourth cut and claimed the title.

“They have to defend their crown. One of the strategies was we conducted a sports fest in our own department and from that we chose the best players. Teamwork din ang kailangan at walang sisihan sa huli,” says Engr. Bernardo F. Vallo, coach of CCSE.

“The better team won. I have no hard feelings at all. It’s good because everyone is friendly and kind,” says Justin Mendoza of CON.

After kneeling to CCSE on the eliminations, CON ousted the Radiologic Technology department to claim the championship ticket with CCSE waiting on the Finals.