August 25, 2012 – Heavily favored to win this year’s credence competition, the College of Medical Laboratory Science (CMLS) delivered another mind-blowing performance with their Warrior motif during the school Intramurals at the college gymnasium. 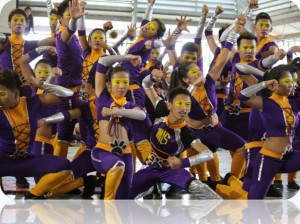 Sporting swords, shields and eye-catching purple and yellow costumes aptly symbolizing their college, the Askies blazed the dance floor with complex routines and quick formation changes. Matched with strong facial expressions, the pep squad made the agitated crowd grew even more excited with each tumble and turn of cheerleader John Maverick Elizalde.

The competition was concluded with the CMLS Askies winning first place while the College of Nursing (CON) Elites and the College of Management and Accountancy Blacksmiths garnered second and third places respectively.

Meanwhile, the College of Computer Studies and Engineering reaped the most number of special awards. The all-male squad was awarded Most Entertaining for the sixth consecutive time and Most Punctual, while IT student Hans Nisperos was Best Mascot.

“People think that we are more prepared, but we are actually not,” claimed MLS cheerleader Elizalde who was among the most ecstatic with the results of the competition.

“I was surprised because the last time I saw them practicing, their routine was not perfect. They changed their routine last Monday. I am proud of them. Dapat ipakita din nila ung same level of energy and enthusiasm in their academics,” said CMLS Dean Arlene Lumbang. 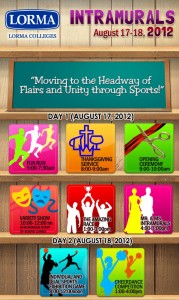 August 17, 2012 – Lormanians express their disappointment towards the postponement of the much awaited school intramurals on August 25. The sudden change in schedule was implemented due to the two-day suspension of classes last August 15 and 16.

The Student Affairs Office decided to reschedule the event for a single day to prevent further reduction of lecture hours. The office added that one day will be sufficient to achieve the essence of the intramurals.

“Athletes, participants and the entire school was caught off guard by Typhoon Helen. We decided to move the date of the intramurals next week so everyone can better prepare for the event, “ said Dean Melba Ano of the Student Affairs Office.

Considered as the highlight events of the intramurals, the Mr. & Ms. Intrams pageant, and the Cheerdance Competition will be on the morning and the afternoon of the August 25 respectively. Meanwhile, ball games and other allied sports are rescheduled on August 23-24 and 28.

“Ball games will be played on different dates because students will just go home of we will schedule it on 25, “ added Dean Ano.

Participants in the cheer dance competition were most affected by the postponement. Although many were delighted by the news, some teams expressed their frustration.

“The change in the schedule was alright for our team. It actually gave us more time to practice and memorize our routine for the cheer dance,” says Roanne Ducusin from the College of Nursing. 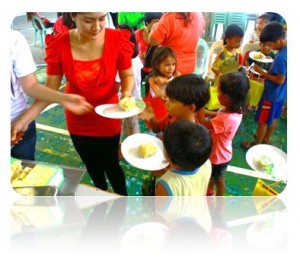 July 21, 2012 – Twenty-eight grade one pupils from Ilocanos Sur Elementary School are the beneficiaries of the Nutrition Month celebration organized by the College of Management and Accountancy at the Lorma Gymnasium.

The said event, which started with a feeding program, is a part of the culminating activity of CMA with the theme “Pagkain ng Gulay Ugaliin, Araw-araw itong ihain.”

“Third year HRM students ang nag-organize ng event and they need to plan pa for a more successful activity because we let them manage many activities like this, “he added.

The elementary pupils, together with their teachers and guardians, were sent to the theater room to watch a cartoon film.

Meanwhile, freshmen, sophomore, and junior BS HRM students competed for the cake decoration and market basket-making contests. Contestants of the said events are comprised of three teams each representing their respective year level.